By now, you all must know how much I love the Final Fantasy series, I talk about those games often enough! If you are brand new to my blog, then know I have played them a lot, so am pretty well-informed on them all and write about them sometimes too. Last year I actually wrote and article for my top 5 female characters in the series so I figured it was finally time to list my top male characters.

For those wondering why I split the two articles into genders, it is because there are so many great guys in this series. It is hard to list a top five in general, since so many amazing characters would be left out and listing every character to reach my favorite ones would also take forever.

So this is the easiest way to approach it. Maybe I will do more in the future as well. For now though, here are my top 5 Final Fantasy male characters! Irvine and his inseparable rifle

We all know Irvine for being a ladies’ man and an expert gunman, known for loving the company of women and having incredible accuracy at the same time. While he focused his charms on Selphie Tilmitt for a while, he was a very important group member with his sharp mind and loyalty to the group.

He even mentions that he thought the team were his “saviors from loneliness”, as he does not enjoy being a lone sniper, despite how good he is at it. Sure he might have been a little cautious with them at times and overly playful, but Irvine is dedicated to keeping everyone safe and loves them deeply. Tidus is also a Blitzball star, a mixture of (under) water polo and soccer that is extremely popular on Spira.

Of all the protagonists from every Final Fantasy game, Tidus is a good representation of how I hope I would react when trouble kicks off. Able to keep some kind of carefree and upbeat attitudes but also able to be serious when the trouble starts and able to give rational responses in situations. It is a good combination to have!

Though Tidus is not much of a fan of the carefree traits he has that are similar to his father’s own attitudes, which he actually resents. The Blitzball star is an interesting character who was willing to confront his own past as he moved from a self-centered athlete and into a selfless hero.

No matter how we see ourselves right now, we all hope to be able to do that as well when the going gets tough. so it is definitely easy to identify with him (at least a little bit). Cloud right after defeating the final boss: the look of a fearless warrior

Cloud is one of the most iconic characters in Final Fantasy, even people who have never played the series can recognize him. Arrogant and proud, his journey to self-discovery sends him down a difficult path where he has to face the fact he was denying his true self.

He started out as an ex-member of an elite warrior unit but learns that being a hero is more than just physical strength and fame. The compassion he gains for the Planet, his loyalty for those who cares for and kind nature become his true strengths.

Though, he does have a fun side too like cross-dressing to save Tifa from the clutches of Don Corneo. He might have a dry humor but well, Cloud just embraces the strange situations he ends up in much to our amusement.
* 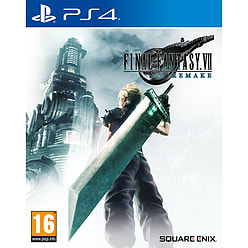 Rosa – his love interest – will help Cecil find his true self.

Cecil is an interesting hero, though maybe a little bit cliché at times. The merciless black knight who struggles to show emotions, with his insecurities making him an ill-fit for his role of Dark Knight. His identity and moral crisis cause him to hate himself for his past actions, but becoming a paladin and befriending others put him onto a much better path.

Despite his shy personality, Cecil is brave and comes to hold some firm beliefs despite his past troubles. It is a great story of personal redemption, which has a very nice feel-good factor to it, plus Cecil is a nice change of pace from all the carefree and laid back protagonists in the series!

Picking the top characters is hard, so there are actually 2 honorable mentions today. That scar makes him look even tougher, but he has a heart.

Cloud might be one of the most well-known characters in the series, but the weapon Squall uses is one of the most iconic. The gunblade suits Squall, the cold-hearted and introverted mercenary and still suits him as he grows throughout the game.

He might not have been well-liked at first, but his dedication to duty and sense of responsibility do make him a leader that can be trusted, despite him being difficult. He likes to narrate his thoughts and feelings a lot, which explains why he is this way, making him very easy to understand.

Though he does become a bit of a cliché when he falls in love with Rinoa Heartlilly and becomes more social, Squall is someone we cannot help but love, and the more open version of him is the one seen in Kingdom Hearts as well. His past still haunts him, but he is on a mission to defeat Sin (and he is not going to stop)

Auron watches over Tidus in Final Fantasy X and has a bit of a mysterious past! Having been a warrior monk and a guardian of summoner Braska makes him a powerful warrior and amazing ally.

He is a bit grumpy, but his fatherly tendencies forwards Tidus and Yuna show just how much he cares for them and that it is not just because he was asked to look after them. He is patient with Tidus being childish, and is plenty happy to irritate him a little as well in that classic parental way.

He does get overlooked a little bit by players at times, but Auron is a great character in the series. Definitely a favourite character of mine.

Time to reveal the the number one on this list now: and the winner is… Zidane and his love interest Dagger, also known as Garnet, Princess of Alexandria

Zidane is a little bit different to the other main characters we have had in Final Fantasy. He is a thief who bumps into a princess who wants to be kidnapped and then he ends up needing to protect the planet. Kind of a hilarious chain of events really! Though that is also him, laid-back and casual, but able to become serious whenever needed.

Zidane cares for those around him, but tries to fight his insecurities alone and instead selflessly trying to help others. When it came down to it, Zidane did not hesitate to run to the aid of an enemy even though it did not quite work out. Three of the members in his party were silent and Zidane connected with them all to help them break out of their shells.

He is clearly a role model for us all, someone who is willing to help others no matter the cost, with the ability to forgive those who have harmed us in the past.
*