Are video games art? This is a question I have been wondering for years, and I was pleasantly surprised when I recently ran into a gaming blog named VGartsite. Luca – the guy behind this project – blew me away with his deep knowledge and unique point of view.

I spent hours reading his posts, until I decided to ask him for an interview.

As a fan of his work, It is a real joy to be able to host Luca on my blog!

1. Welcome Luca and thank you so much for accepting my interview request. For a starter, please introduce yourself to RGL’s readers.

Hello, my name is Luca Frangella, and I am the founder and owner of Video Games Art. I am an Italian physics & math teacher at a gymnasium.

I started this project, “Video Games & Art”, in order to promote video games as a form of
contemporary Art.

I take joy in researching and talking about art, science, philosophy and sociology of video games.

Plus, I like sharing thoughts, memories, emotions, feelings and
opinions about the games I grew up with, and those that still accompany me through my life!

I was born in 1974 and was very lucky to experience video games at an early age. I am sure
the first one was Pong, I have vague memories… I think I was 5 or 6; I remember a home console, owned by my cousins or family friends, maybe Intellivision or Atari.

I have clear memories of my small hands on that weird knob interface moving the paddle on a
black&white; screen! Love at first sight! My life was doomed 😀 , but I realized that just in my 40s! I clearly recall I played other early games on Intellivision together with my primary school
mate Fabrizio.
They were the likes of: Burger Time, Donkey Kong, Frogger, et cetera…

3. What about your first gaming system you ever owned?

Well, I do not know if it counts, I had several pocket LCD games like Nintendo Game &
Watch, Polistil Time & Fun, etc.

My memories of the early 80s are clearer; my elder brother Nino bought a Sinclair ZX Spectrum 48k in 1982 or 1983; he was studying computer science at University.

I have clear memories of the games stored on cassette tapes; at the time games had no
copyrights in Italy, they were sold as supplements of computer magazines with made-up
titles; I discovered the original titles later.

I am talking about games like Manic Miner, Atic Atac, Jet Pac, School Daze, Back to School, Knight Lore, The Way of The Exploding Fist, The Hobbit and so on! How can I forget the distinctive sound of loading games? Absolutely Sublime!

A few years later my cousin Luigi bought a Commodore 64; I had great fun with Ghostbusters, Spy vs Spy, Impossible Mission, et cetera… Later on, my other elder brother Stefano bought a Commodore Amiga 500… It was a revolution! Lemmings, Another World, Altered Beast, Shadow of the Beast, Bubble Bobble, Batman, Shinobi, Sensible Soccer, North & South etc.

As a teen, I was really impressed by the graphics of Defender of The Crown! In the meanwhile Nino had bought his first home PC running DOS and later Windows, so I even got to play a few early DOS and Windows games.
I clearly recall the likes of Deja Vu, Myst, The Bizzarre Adventures of Woodruff and the Schnibble, Doom etc. One of my favorite titles ever was Alone in The Dark, WOW!
Me and my brother Stefano were completely enraptured!

Oh and I even played Resident Evil 1 on Windows!

I was! I walked into an arcade for the first time at an early age! Again, my life was doomed!


5. I am going to name a few video game genres: please tell me your favorite retro title for each of them:

Alone in the dark

Marble madness and the first release of Prince of Persia (1989) Lemmings is also my favorite puzzle game ever

Defender of the crown

Shinobi and The last express.

The latter is a 1997 adventure game designed by Jordan Mechner, Prince of Persia’s creator. 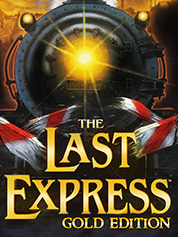 My elder sister Rossella bought a PS1 in 1995 as a Christmas present for her sons, so I also played some PS1 games with my nephews. Since then, I have tried a lot of different consoles: Xbox Original, PS2, GameCube, Wii, Xbox360, just to name a few.

I stopped playing on Windows systems between 2005 and 2009, but then, I started again in 2010. How bizarre: my elder brothers Nino and Stefano do not play video games any longer! They stopped in their 40s!
Instead, I have never stopped and have no intentions to! At the moment, I am playing on Windows 10, PS4 and PSVR. VR is a revolution, I love to take refuge in my headset!

To be honest, I am having more fun now – starting from 2010 – than during my teens!
When you are a kid, your approach is superficial, games are like toys. Now, it is
different: games are like experiences to me! I am a long-time cinephile and also a
comic book collector; but since 2010 I have been spending my free time with games more
than with movies or comics!

7. Do you play online or with your friends/family members?

No, I do not like online games, and I prefer single-player experiences, mostly narrative games. I saw Dragon’s Lair for the first time in 1985 and I thought it was a movie! Talk about visual art…

Well, as I said, I was enraptured by Alone in The Dark in 1992; my brother and I used to
spend the night playing, trying not to wake up our parents… unforgettable sleepless nights! Also
Resident Evil 1 was a great night experience in 1996! I remember my childhood
summers playing arcade games, in particular Yie Ar Kung Fu; I was really a master!

Again, I can still hear the sound of loading games on the ZX Spectrum and the Commodore 64! The several afternoons I spent playing C64 with my schoolmates! The first time I saw Dragon’s Lair! WOW! The several days I spent trying to solve Lemmings’ puzzles! Swinging for the first time through the skyscrapers of New York in Spiderman (2002, PC)! Too many memories, sorry!

By the way, today I have deeper emotional connections to video games. I grew up with VGs
and VGs grew up with me! The medium has evolved and matured!

9. What prompted you to start a gaming blog? In 2010, I started to play more than I did in my teens without even realizing it! In 2015, I finally realized that my life was doomed by VGs! My older brothers are both programmers, my older cousin Luigi is dead, but he too was a programmer! I have always lived surrounded by computers and games!

My older brothers and cousin stopped to play in their 40s, they no longer felt the gaming fire in their adulthood. I did though! Why? As I said, I grew up with VGs and VGs grew up with
me!  Today VGs are not just the simple electronic toys or the challenging entertainment systems of my youth.

I realized that video games are following the same evolutionary path as Comics. Comics were considered children stuff for a long time, they took the big leap in the 80s and now you can find them in any bookshops. Graphic novels are universally considered pieces of expressive art.

Video games are becoming more and more about serious storytelling and/or expressive, interactive experiences, and I intend to encourage and promote such an evolution. That does not mean denying the glorious past of VGs and my teen memories!
It is just something different, something more, something to add and not to take away. Something that can live together with the playful, simple and easy entertainment for teens.

The same goes for Cinema and Comics, it is a matter of market and industry expansion,
a change of cultural paradigm. Today’s titles are still dominated by easy, violent kills,
shooting and fighting mechanics, but I think that someday games too will be universally considered pieces of expressive Art! When will this happen? in 20-30 years, in my opinion.

I wrote an article about it: https://vgartsite.wordpress.com/2019/06/02/expressive-evolution-of-video-games-cinema-and-comics-comparative-analisys/

10. What is the goal of Vgartsite? Video games to be respected in the same way as movies? I am all for it! Luca has an ambitious project, and it is an honor for me to support it!

Video Games & Art is a project aiming to promote video games as a form of contemporary, expressive art, just like cinema.

Whatever gives players an intellectual and unforgettable experience is within my sphere of interest.

Future plans: to keep playing and writing about games for the rest of my life!

Secret wishes: to play AAA big budget games aiming at the expression of deep contents and storytelling, not aiming at killing, fighting, challenges or easy entertainment.
Titles coming with revolutionary interactive mechanics such as to go beyond cut scenes.

I call it “the total immersive artistic experience”, because VGs borrow a lot of features from movies, comics, novels, etc. but they have an extra “weapon”: interactivity!

Thank you very much for this opportunity Andrew, it was a total pleasure being featured on your blog and a privilege letting your readers know about my project.

Below are my social media accounts: please come and say hi!

30 thoughts on “Are video games art? – let us find it out with another fellow blogger”