I had promised that to Stefan, one of my readers: “Soon I will write a new retro story, and a pinball machine will be the co-star!” it was a gap that I had to fill.

For me, it all started with a cabinet, but for many others – including Stefan – their first gaming passion was this special machine that I personally consider the forefather of video games.

As a child, I often asked my father about his favorite games in his youth and he would tell me his 60s Retro Stories. Back then, he and his friends spent their leisure time between foosballs and the first pinballs that began to circulate in their town.

I preferred arcade games, but I was deeply fascinated by his stories and I absolutely wanted to impress my father, who – needless to say – was my hero.

And so it was that without telling anyone, on an afternoon, 31 years ago, I took a bus to the other side of the city to play a pinball tournament.

Below is the recount of events of that intense day…

A perfect plan – nothing can stop me

A clip art of a pinball flipper

It was my neighbor Tom who informed me about the above tournament. His older brother used to hang out at that arcade and had already signed up for it. The registration cost 5 dollars, but fortunately my savings at that moment amounted to 10. Nothing could prevent me from partaking in the competition!

I was excited for so many reasons: it was my first gaming tournament ever and there were some prizes up for grabs! Above all else though, I wanted to surprise my father by presenting him with a trophy won at his favorite youth game.

The tournament was going to start at 4 pm on Saturday: I checked the bus schedule and there was one leaving from my area at 3.35 pm. According to the time table it would take 20 minutes to get to the arcade… Perfect! I also took care of arranging my way back: Tom added that it was going to be an 8-player knockout tournament, so I reckoned that it would last a maximum of an hour and a half. I was going to take the 5.40 pm bus in order to get back home at 6.10- 6:15 pm, at the very latest. I could make it! At that point I only had to make an excuse to my parents: I got my schoolmate Lawrence to cover for me…

Hitting dangerous snags – every rose has its thorn That fateful day finally arrived and at 3 pm I went to Lawrence for (according to the version that we had agreed on) spending the afternoon with him. As soon as he let me in, I called my parents to let them know that I had arrived safely. Everything went smoothly, my mother did not suspect anything. I said goodbye to my friend and told his mother that I had to go back home for a moment. Actually I left and headed towards the bus stop. The bus left punctual and at 3.55 pm I walked into the arcade. My first video game tournament ever was about to begin!

Where are the snags? No worries, they are coming… 😀

First of all, at 4:10 pm only 3 participants had shown up: my neighbor Tom, his elder brother David and me. Moreover, the two were accompanied by their father, who immediately came up to me and asked me with an inquisitive look: “Do your parents know that you are here?”

Somehow I managed to keep my cool and after a couple of seconds of hesitation, I replied: “Yes, yes… My father took me here and is coming to pick me up later.”

But the worst thing was that the arcade owner wanted to cancel the tournament… It took a great deal of persuasion and two big, glistening eyes to talk him out of it. 😀

We had to wait for about an hour, but eventually we managed to put 8 people together and at 5.08 pm the tournament kicked off!

I had mixed feelings inside of me: on one hand I wanted to be immediately kicked out of the tourney in order to be able to take the 5:40 pm bus and get back as originally planned. On the other one, I wanted to play my best and see how far I could go, despite the risk of facing the worst punishment ever from my parents.

I kept telling myself: “I am taking part in a tournament, an official competition together and – at the same time – against other people.” I was discovering that feeling called “competitiveness” and I knew that my desire to have an impact on the tourney was going to get the upper hand. I was deep in thoughts, while the arcade owner was making the knockout tournament draw… One of the participants gave me a pat on the shoulder and went: “We have been drawn against each other, good luck! Everything Fine? You look a little absent-minded… ”

It was a 14-year-old boy named Charles and was overconfident that he was going to beat me. I was starting to think that I would be stopped in the first round, when I saw the * pinball machine we were going to play the tournament with: it was a 1980 Rolling Stones (what a beauty!) that I knew like the back of my hand. By sheer coincidence, the bar near my house had the same model and in recent times I had gone and played it together with my father, who had taught me some little tricks.

Now feeling much more confident in myself, I took a look at the tournament bracket, which was as follows:

Tom vs David (his brother)

The rules? Oh, they were very simple: each match-up consisted of a single pinball game for both players. Who had scored more points, would have moved on to the next round.

Family fights – shortcut to the final The first matchup featured Tom against his brother: the latter easily bested the former, but David never got to play his semi-final due to force majeure.

The defeat had not sat well with Tom, who began calling his brother names. David reciprocated and their father quickly took them away. They left without even saying goodbye 😀 , but I can understand their father’s desire to quickly walk out of the arcade: his kids had made a spectacle of themselves.

Tom would have been my direct opponent in the semifinals, but his forced retirement paved me the way to the final. I “just” had to beat Charles.

Well, said and done: he was not that good after all, since he scored less than 100,000 points with 5 balls. His biggest gaming flaw was that he nudged the pinball with the delicacy of an elephant in a porcelain cabinet, thus quickly tilting the machine.

It was my turn now. I was very excited, but I kept repeating myself my father’s tips: “When the ball is heading to the out lanes, just nudge the machine slightly upwards, so that the ball can bounce off the rubber post and go back to the play field. The Rolling Stones is a sensitive model, do not overdo that, otherwise you will immediately tilt it. Oh and when the ball is going straight down the middle, just slide the machine a little bit sideways. No matter how hard you press the flippers, they will be unable to catch the ball if you do not slide the pinball.”

I beat Charles’s score with my very first ball and racked up more than 350,000 points overall. Charles’s only answer was leaving. Losing to a 10-year-old boy in front of an audience was probably too much for him to take. I could not care less anyway: I had reached the final act of the tournament and I could relax a little bit by watching the others play.
* 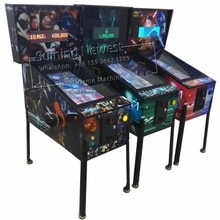 To the end! – hopefully not to the bitter end 😀

The other two matches saw Sean and Donovan emerge as winners. One of them was going to be my final opponent, that is, the last obstacle between me and an unexpected victory…

I knew that I was going to get a sound telling-off from my parents, no matter what. It was therefore better to focus on my final game, in an attempt to make my day taste less bitter. 😀

Do not miss the second and last part of this Retro Story! The best is yet to come and above all, there will be a surprise ending…